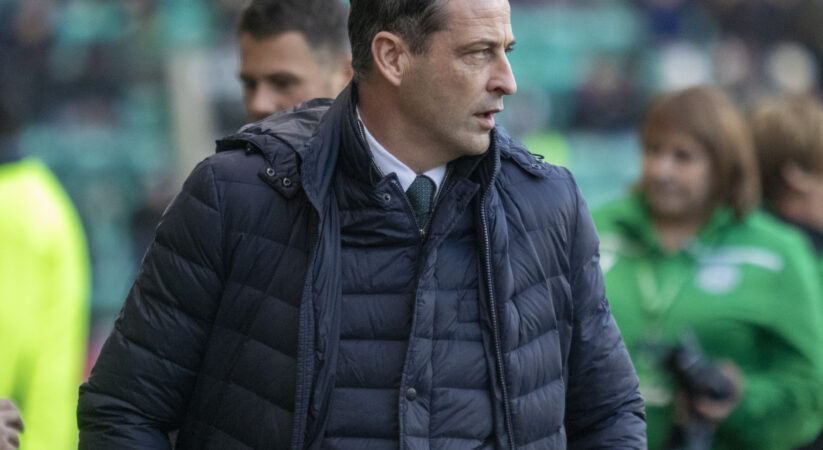 There was a cracking atmosphere right from the outset in Leith yesterday afternoon as Hibs faced Ross County in their first home game of the season, and their first league fixture with a home crowd for over a year, writes Jack Barnes.

Ross County were set up to frustrate the hosts, lining up in a 4-3-3 and committing two fouls inside the opening minute. The visitors won an early corner which was punched away by Matt Macey, and in the opening minutes had their best chance of the game – a header which sailed just over the bar from striker Jordan White.

Hibs lined-up in a 4-2-3-1 with Kyle Magennis occupying the ten position and Christian Doidge up front after a period on the sidelines due to contracting Covid-19. Hibs’ pace and movement in the final third was proving to be a problem for Ross County, as Martin Boyle got in behind the defence in the 13th minute, with Magennis failing to convert the chance which fell to him.

The Hibees were unable to convert their early dominance into clear-cut chances, often winning corners which led to nothing, but continued to push very high up the pitch. At times all players bar the keeper were in the opposition half.

It was Boyle, goalscorer against Croatian side Rijeka in midweek, who broke the deadlock in the 22nd minute with a brilliant finish from range which looped over the County keeper Ross Laidlaw. Magennis made it 2-0 four minutes later from a Josh Doig cross, and Easter Road was rocking.

It felt like a farewell performance for Doig, who was making his first ever competitive appearance in front of a crowd in what could very well be the end of his time in Edinburgh.

For Hibernian’s third goal it was right back Paul McGinn who crossed in this time for Doidge to head home, putting his side 3-0 up in the 33rd minute.

A feature of Hibs’ dominance in the first half was Doyle-Hayes’ impressive performance as a midfield conductor, constantly telling his teammates where to pass and collecting the ball to start play from the back.

The score was 3-0 at the start of the second half. Paul Hanlon, who was bandaged up early in the first half, was replaced by Darren McGregor at half-time.

It was damage limitation for Ross County who created very little again despite a double change at half-time, and didn’t manage a single shot on target over the 90 minutes. Hibs continued to dominate possession, again fashioning crossing opportunities for their fullbacks, but controlled the game very well – Magennis in particular never stopped running and pressing the County defence.

Scott Allan replaced Jamie Murphy for the final 12 minutes and new-singing Daniel McKay was given 20 minutes, replacing Boyle who received a standing ovation after another standout performance.

In what was an encouraging performance ahead of a crunch European tie in Croatia on Thursday, Hibs Manager Jack Ross said “My players were terrific. Just a brilliant afternoon for us. It’s a really positive start.”