Tuesday, 24 May 2022
You are here: Home 2021 May 26 Hibs first game back in front of fans ends with narrow defeat to Celtic in Penicuik 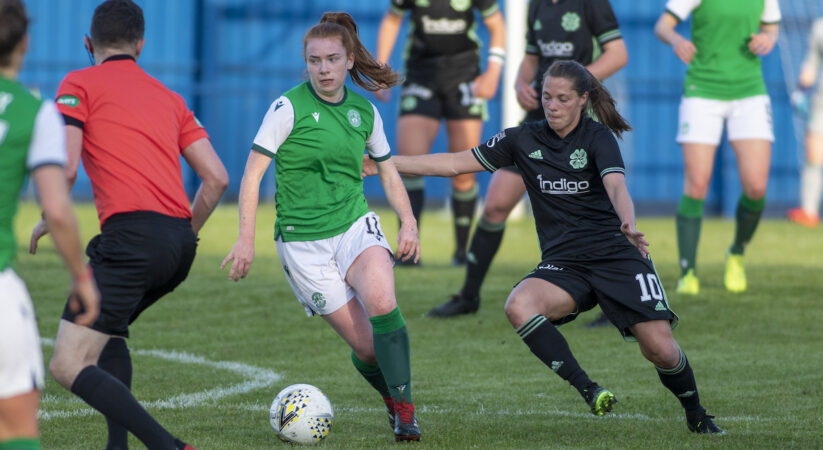 Hibs’ first game back in front of the fans ended with a narrow1-0 defeat to Celtic at Penicuik Park tonight.

The game had been due to kick off at 7.15pm but was delayed for 30-minutes due to problems on the M8 motorway and kicked off in front of a sell out crowd.

Hibs won an early free-kick in a dangerous position when Collette Cavanagh was fouled by Chloe Craig, but Rachael Boyle’s cross went out for a goal-kick.

Moments later Mariah Lee managed to spin and shoot but her effort went wide of the post.

Carla Boyce had a chance for Hibs but Craig did well to block the danger then at the other end Sarah Ewens headed a Chloe Warrington cross into the path of Anna Filbey but her effort was blocked and the danger cleared.

Both sides created chances and Lee took possession inside the area but her shot was blocked in a crowded penalty box the at the other end Leah Eddie fired over the bar.

Lee then set up Kate Nicolson but her shot flew well over the bar then Hayes tried her luck from distance but didn’t trouble Emily Mutch.

Amy Gallacher was shown a yellow card in the 39th minute for a trip on Isibeal Atkinson then Nicolson almost game the visitors the lead after winning possession inside the Hibs penalty box but her shot spun wide.

Just before the break Mutch did well to turn a Lisa Robertson free-kick round the post and from the resultant corner Celtic took the lead when Caitlin Hayes headed the ball into the net at the back post after some good work by Filbey and Robertson.

Kirsty Morrision went off with an injury and was replaced by Shannon Leishman and Celtic had the better of the opening spell in the second-half.

In the 57th minute Siobhan Hunter replaced Boyce then moments later a Boyle free-kick into the danger area was cleared by Lee.

Hibs then went close from a corner as Gibson’s side looked for an equaliser but Celtic had a chance to double their advantage when Robertson delivered a superb cross byt Hayes’ header was just off target.

Lee then passed up a chance with an angled drive which flew across the face of the goal.

Robertson was the next name in the referee’s notebook as Celtic continued to dominate possession and looked determined to take all three points in their bid for top-spot.

Hibs refused to accept defeat however and some great skill from Cavanagh saw her dribble through the Celtic defence but her effort from just inside the area went just wide.

Boyle then cut in from the right and played a 1-2  but mishit her shot which flew well wide.

Hibs continued to press forward and had a shot cleared off the line before being awarded a free-kick just outside the area but Hunter’s low shot was well saved by Rachael Johnstone and the visitors held on to take all three-points.