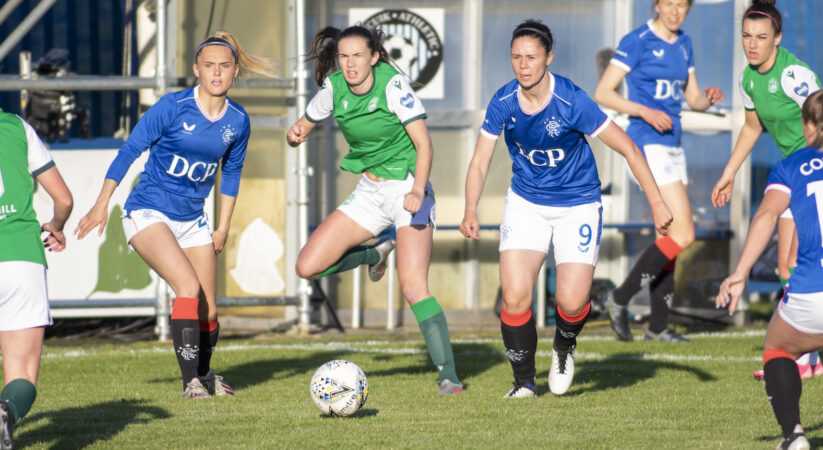 Hibs four-match unbeaten run came to an end with a 3-0 defeat to Rangers at Penicuik Park in Midlothian tonight.

Dean Gibson made one change from the starting XI that beat Motherwell on Sunday with Kirsty Morrison replacing Carla Boyce.

The game kicked off in perfect weather conditions in Penicuik and the visitors took the lead in the 6th minute when former Hibs’ player Lizzie Arnot’s cross was headed home by Carly Girasoli.

Rangers continued to press and Emily Mutch did well to save another Girasoli header to keep the score at 1-0.

In the 29th minute however Girasoli scored her’s and Rangers’ second goal of the night with another superb header.

Moments later Zoe Ness was booked for a foul on Collette Cananagh.

On the hour mark Emma Brownlie’s cross was dropped by Mutch but thankfully Cavanagh was on hand to clear the danger.

Hibs continued to press forward trying to get back into the game and Cavanagh cut in from the right and tried her luck from long distance but her effort went just over the bar.

In the 66th minute Boyce replaced Morrison as Hibs began to dominate possession without creating any clear-cut chances.

Amy Gallacher displayed some sublime skills in midfield to set up Nicky Docherty on the right wing but the Rangers defenders crowded her out.

Jenna Fife dropped a Boyle corner but the Rangers’ defenders were first to react and the ball was cleared.

With 15-minutes remaining Rangers wrapped things up when Sam Kerr was fouled just outside the area. Brownlie’s free kick hit the wall and rebounded to Kerr who crossed the ball into the danger area and Brianna Westrup fired the ball into the net from close range.

Ngangom Bala Devi almost added a fourth in the last minute but fired just over the bar from inside the area and Rangers held on for comfortable victory.