Tuesday, 24 May 2022
You are here: Home 2020 November 8 Hibs winning start to the season ends with narrow defeat to Rangers at Ainslie Park 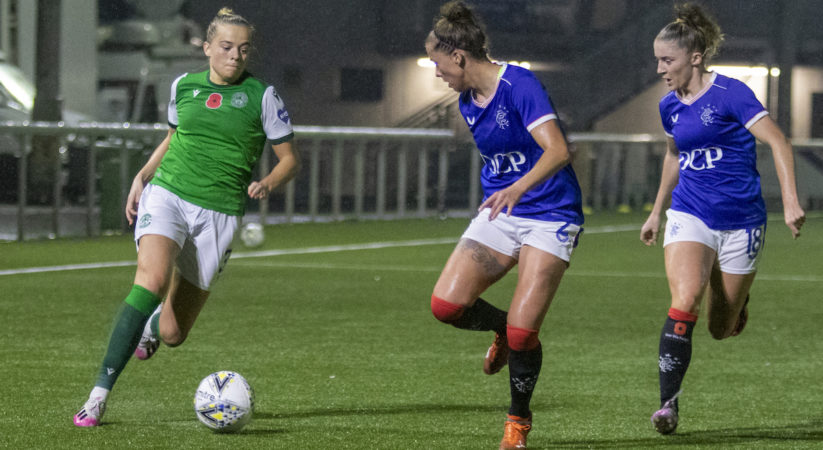 Hibs winning start to the season ended with a narrow 1-0 defeat to Rangers after a hard-fought and fiercely contested 90-minutes at a rain-soaked Ainslie Park this afternoon.

Hibs went into the game, which was shown live on BBC Alba, in second place with the same number of points as Rangers but having scored two more goals.

Malky Thomson’s side arrived at Ainslie Park for the second successive weekend having taken all three points from Spartans last Sunday thanks to a controversial goal and there were a number of familiar faces in the visitors line up with including Jenna Fife, Lizzie Arnot and Chelsea Cornet.

Former Rangers’ player Amy Muir, who made her Scotland debut in March and was brought into the squad for the recent games against Albania and Finland started for Hibs who were without youngster Shannon McGregor who will miss the rest of the season with an ACL injury.

Both sets of players had difficulty adapting to the dreadful weather conditions in the north of the capital and after an even start to the game the first incident of note came Rangers’ Daina Bourma was booked for a dive inside the penalty area.

Hibs’ Amy Gallacher then did well down the right wing and sent in a dangerous cross which was cleared by Brianna Westrup.

In the 35th minute Arnot tired her luck form long range but her effort was deflected past the post. Clare Gemmell took the resultant corner kick which was cleared into the path of Nicola Docherty but Hibs’ keeper Sophie Allison saved her volley from outside the box.

Hibs almost took the lead shortly before the break when Charlotte Potts’ looping header deceived Fife but rebounded off the crossbar and the danger was cleared.

Emma Brownlie was booked for a foul on Colette Cavanagh four minutes after the restart then moments later Leah Eddie was shown a yellow card for a challenge on Kirsten Reilly.

Hibs made a change in the 64th minute when Eilidh Adams replaced Gallacher then Cavanagh was booked for a foul on Reilly.

With 15-minutes remaining Rangers took the lead when Brogan Hay broke clear down the right wing before sending a superb cross to the back post. Arnot was on hand to fire in a shot which Alison could only parry into the path of Cornet who prodded the ball into the net from two yards out.

Hibs continued to press forward in search of an equaliser and Kirsty Morrison set up Rachael Boyle but Fife saved her close range effort.

Carla Boyce replaced Cavanagh with 10-minutes left and Hibs continued to mount attack after attack but the Rangers defence held firm to secure the three points which sees Hibs drop from second to fourth place in the table.