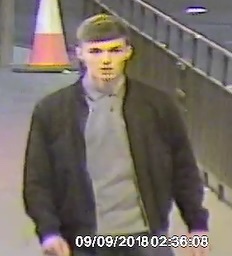 Police in Edinburgh have released images of two men they wish to trace in connection with an ongoing investigation into a serious assault in the city centre.

Officers are eager to trace two men pictured as they believe they may be able to assist with the investigation.

The men are described as being white and around the age of 20-years-old.

The first is described as around 5ft 10ins tall with a slim build and dark hair.  He was wearing a black bomber jacket, a grey polo shirt, black trousers and white trainers.

The second is described as around 6ft tall with a slim build and short brown hair.  He was wearing a white long-sleeved t-shirt, dark trousers and dark trainers.

Constable Alexander Spence from Gayfield Police Station said: “We are eager to trace the men pictured as we believe they can assist with enquiries and would urge anyone who may recognise either of them to get in touch with us as soon as possible.”

Anyone with information is asked to contact officers at Gayfield Police Station on 101, quoting incident number 1807 of September 11, or report this anonymously to the charity Crimestoppers on 0800 555 111.”