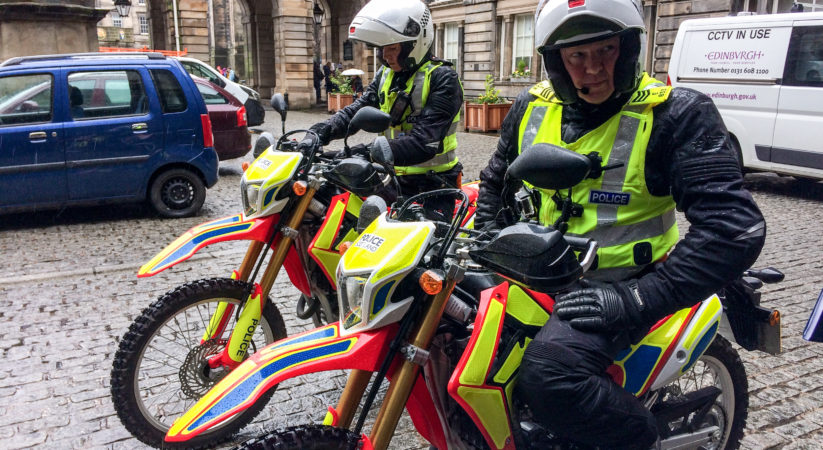 Police in Edinburgh have been issued with four new off-road motorbikes bought by the Edinburgh Community Safety Partnership to combat anti-social behaviour and theft across the capital.

Officers will use the bikes to patrol hotspot/targeted locations at key days and times, especially at weekends, when residents experience the most distress from the anti-social behaviour of illegal off-road motorcycle use.

Tackling motorcycle theft and related disorder is a key priority for the Partnership and work is ongoing to support Police Scotland’s Operation Soteria.

Unveiling the bikes today, Councillor Amy McNeese-Mechan, Chair of Edinburgh Community Safety Partnership, said: “The theft of motorbikes and related offences has become a real problem in parts of Edinburgh and one that is a matter of great concern to the local community.”

Chief Superintendent Richard Thomas said: “The addition of off-road bikes to the divisional fleet will be invaluable in assisting officers in their ongoing campaign to tackle illegal motorcycle activity and associated disorder across the city.

“The people of Edinburgh do not want a small core group of individuals to risk lives by driving dangerously.

“Police Scotland will use motorbikes alongside a range of other tactics to provide community reassurance, engage with young people and motor cyclists and act as a visible deterrent to anti-social behaviour both on and off city roads.

“Our local officers will be very visible on these bikes in the coming weeks and I would encourage any of the local community to speak to a member of the Orbit team when they are on patrol.”