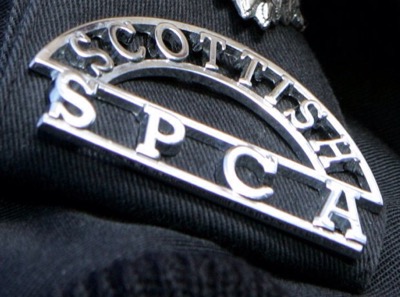 The Scottish SPCA is appealing for information after a dog was discovered tied up on Arthur Street in Edinburgh on Bonfire Night.

Scotland’s animal welfare charity was alerted after a member of public spotted the female black and white Border collie tied to a bin store.

Senior Inspector Stuart Murray said, “The caller saw someone walking over to a bin store and then emerge alone.

“The dog was unable to lie down due to how tight her lead was tied and was terrified with fireworks going off nearby.

“She’s been named Sparkle by staff at our centre in Edinburgh as sadly she doesn’t have a microchip which since 2016 has been a legal requirement for dogs.

“We’re urging anyone with information to get in touch.”

Abandoning an animal is an offence under the Animal Health and Welfare (Scotland) Act 2006.

Anyone found guilty of doing so can expect to be banned from keeping animals for a fixed period or life.

Anyone with information is being urged to contact the Scottish SPCA animal helpline on 03000 999 999.