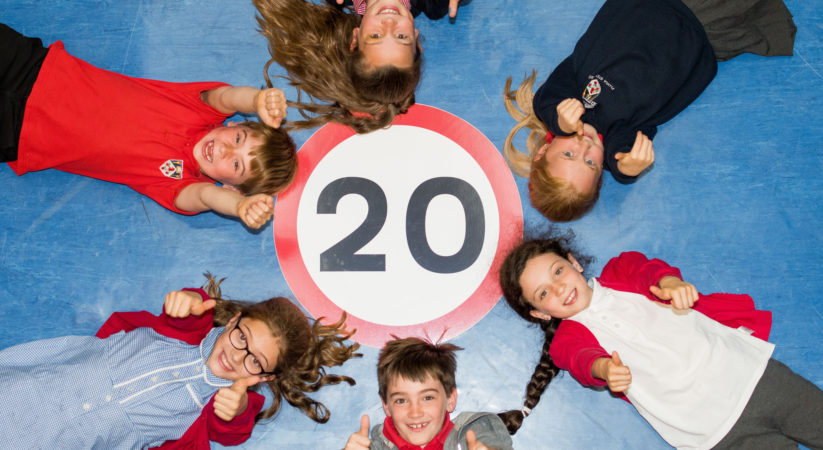 Primary school children in Edinburgh have been creating vibrant 20mph-themed artwork in support of the ongoing rollout of slower speeds to residential, shopping and city centre streets across the Capital.

As work begins to install signs and lines for the next phase of the project, primary four pupils at Flora Stevenson’s Primary School have produced 20mph-themed posters featuring slogans such as “30’s dirty – so don’t do it; 20’s plenty – so do it” and “Go Slow – 20’s plenty” to drive home the message that slower speeds are safer.

Residents from Clermiston to Clovenstone, South Gyle to Silverknowes will start to spot new 20mph signs and lines in their area as preparations get under way to launch Phase 3 of the rollout, due to go live on Wednesday 16 August.

Work has now begun to install new signage across Zone 4 (North West) and Zone 5 (West), with 20mph roundels and signs appearing in streets whose speeds will be coming down from next month.

As with the rest of the rollout, a network of roads in the Phase 3 area will be retained at 30mph and 40mph, including for example Calder Road, Maybury Road, Queensferry Road and Lanark Road.

Driving more slowly reduces the number and severity of casualties. A person is seven times more likely to survive if they are hit by a car driving at 20mph, than if they are hit at 30mph.

Councillor Lesley Macinnes, Transport and Environment Convener, said: “These pupils have done a great job creating some really eye-catching artwork urging drivers to watch their speed. With children, older people and those with mobility or sensory issues most at risk from excessive speeds, it’s a no-brainer to introduce 20mph in residential and shopping streets across the city, as well as the city centre, as we work towards Vision Zero where everyone is kept safe from the risk of being killed or seriously injured on our roads.

“If you live or work in the Phase 3 area, look out for the new 20mph signs going up in the coming weeks, ahead of the new limit coming into force on 16 August.”

Irene Brennan, who retired at the end of term as Head Teacher of Flora Stevenson’s Primary School after five years at the helm, said: “20mph is a huge benefit to children at Flora Stevenson’s school because we’re on an extremely busy crossroads and if the traffic is slowed down then it gives the children a better opportunity to judge the speed of traffic for crossing.

As well as improving road safety, the publicly-supported 20mph scheme aims to make streets calmer, quieter and more pleasant places to spend time in, boosting a sense of community and helping the environment by encouraging active travel like walking and cycling.