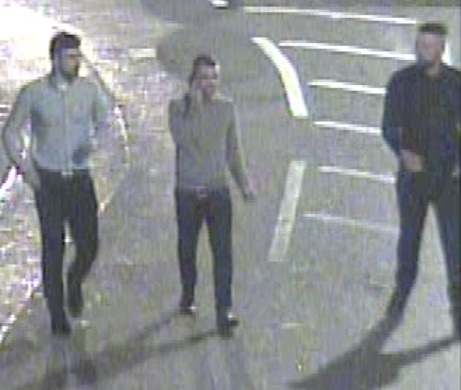 Police in Edinburgh have released images of three men they wish to trace in connection with a serious assault.

Two men, both aged 21, were walking towards King Stables Road when one of them was punched several times, sustaining serious facial injuries.

The second man was also assaulted, but was uninjured.

Officers are eager to trace the men pictured as they may be able to help with the ongoing investigation.

The first man is described as in his twenties, 5ft 10ins tall, of medium build, with black hair, stubble and wearing a light blue long-sleeved shirt and black trousers.

The second man is described as in his twenties, 5ft 7ins tall, of slim build, with dark hair, and wearing a light-coloured jumper and dark jeans.

The third man is described as in his twenties, 6ft tall, of medium build, with dark hair, and wearing a black shirt and black trousers.

The three men were last seen heading in the direction of Victoria Street.

Detective Constable Andy Cory of Gayfield CID: “We’ve conducted numerous enquiries in the area since the incident, but are today appealing for the public’s help.

“Anyone who recognises these men is urged to contact us as soon as possible.

“Likewise, if the men see this appeal, they are asked to get in touch with us themselves.”

Those with information can contact Police Scotland on 101 or report this anonymously to Crimestoppers on 0800 555 111.