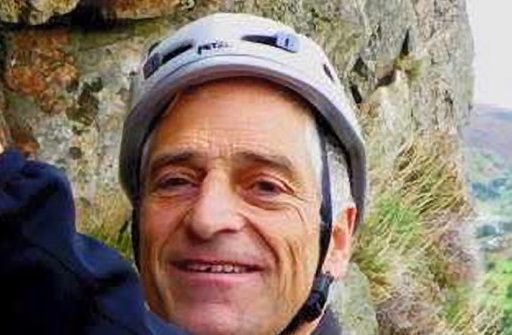 Tributes have been paid to one of Scotland’s most respected mountaineers who has died after plunging into a crevasse in the Swiss Alps.

Des Rubens, recently retired as a teacher at Edinburgh’s Craigroyston High was climbing the 14,022ft Finsteraarhorn, the highest mountain in the Bernese range.

According to the police, loose rock caused a fall while he was traversing a ridge, and he fell 1000ft into a glacial crevasse.

Rescuers were unable to save the highly experienced 64-year-old after his companion raised the alarm.

Members of the climbing community last night expressed their shock and sadness at the accident.

“He was a member of the club for 30-plus years and a previous president for two years.

“You have to be highly regarded to get into that position.

“He’d climbed all over Scotland, the Americas and the Himalaya and we’re absolutely stunned by his loss – I’ve never received so many comments and tributes.

“Outdoor activities have been his life. He is probably the person we would have least expected to have had an accident of this nature.

“Our thoughts are with his family at this difficult time.”

David Gibson, of the Mountaineering Council of Scotland, added: “We’d always been happy to contribute to his expeditions. It’s a sad loss. Our thoughts are with his family.”

As well as being a prominent member of the mountaineering community, Mr Rubens was a respected teacher.

He had recently retired, having spent much of his career at Edinburgh’s Craigroyston High.

Former pupils and parents have inundated a Facebook page set up to pay tribute to him.

TRIM chairman, Robert Pearson,  said he would be remembered fondly.

He said: “I’ve never seen a response like this. Tributes have been pouring in since we announced the sad news.

“It’s a mark of the man that his loss has had such an impact.

“What is clear from the posts we’ve seen is he had a remarkable effect on many lives in the local community.

“He was dedicated to his work and his death is a terribly sad loss.”

One, Craig Stevenson, wrote: “Thank you for the awesome memories, sir.”

Another, Barry Dickson, posted: “Mr Rubens was a legend. I was in his class and loved every time he took us out climbing or canoeing.”