Friday, 28 January 2022
You are here: Home 2016 June 20 Video: Violence breaks out between two motorcyclists in Joppa 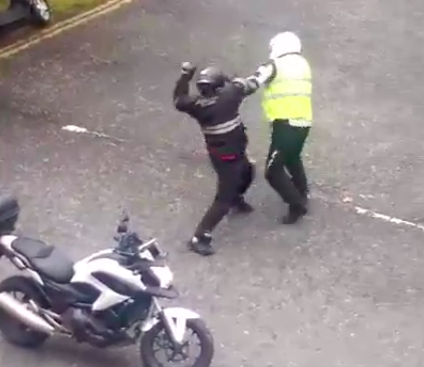 A video has emerged online showing a pizza delivery driver have a vicious fight with another motorcyclist.

The footage shows the men arguing in a street before violence erupts.

At one point the pizza delivery driver kicks into the other man as he is lying on the ground still wearing his helmet.

The battle only ends after passers-by pleaded with the two men to stop.

The video was taken in the Joppa district of the city on Thursday and starts with the pizza man and motorcyclist face-to-face and yelling at each other.

One passer-by shouts at the pair “You cant fight like in the street you are not children.”

A spokesman for Pizza Hut Delivery said: “We are aware of this video and are currently investigating this matter.

“The safety of the public and our drivers is our priority and we do not condone this behaviour.”